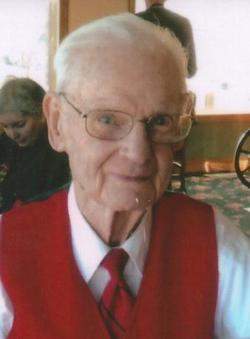 Richard Vernon "Dick" Olson, age 91, Duluth, died May 8, 2014. He was born in Proctor, MN, on August 20, 1922 to Alfred and Lily Olson and was a graduate of Meadowlands High School and the Superior Vocational Technical School. Richard was a Navy Veteran of WWII. He married Roberta Findlay in Superior on November 6, 1943. Richard had worked as welder for Western Electric and as a heavy equipment mechanic for Ziegler, Inc and the ZECO Co. He was a charter member of Hillside United Methodist Church. He was the founder of the Arrowhead Chapter of the Regional Automobile Club of America and a life member of the Antique Automobile Club of America. He also enjoyed hunting and fishing. He is preceded in death by his parents, wife, brother Kenneth and sister Bernice. Richard is survived by his son Robert(Kay), of Grand Marais, daughter Jan(John)Holt, Hermantown, sister Doris Mancina, of Westminster, CA, granddaughter Joan(Andy)Olson, of Hoyt Lakes, special niece Helen and several other nieces and nephews. The family wishes to thank Tammy, Jamie, Monica and Alisha and all the staff at Edgewood Vista for their love and care. Due to Richard's request, there will be no service. Memorials to Hillside United Methodist Church, in care of the family, are preferred. Inurnment at Sunrise Cemetery. Arrangements by Williams-Lobermeier-Boettcher Funeral Home.

To send flowers to the family in memory of Richard Olson, please visit our flower store.