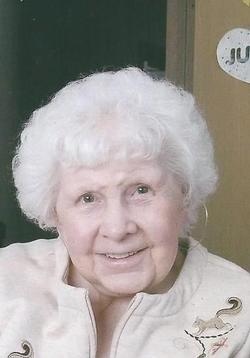 Dr. Rita Marshall, 94, of Duluth, died Saturday, December 13, 2014. She was born on April 8, 1920 to Joseph and Flora Laverdiere in White Bear Lake, MN. The family later moved to Superior where she attended St. Anthony and Cathedral High Schools. She was a graduate of St. Francis School of Nursing in LaCrosse, WI. After spending several years of clinical nursing, she continued her education at Marquette University and graduated with a Baccalaureate Degree in Nursing Education. She then returned to professional nursing practice for ten years in positions of nursing supervisor, instructor, and nursing school director. In 1957, she was awarded a Public Health Nursing Grant to attend the University of Iowa and graduated with a Masters Degree in Nursing Services Administration. She later enrolled in specialized summer courses at Catholic University in Washington, DC. Throughout the following years, Dr. Marshall held clinical and administrative positions in hospitals and nursing school. She was the Director of the Baccalaureate Nursing Program at St. Louis University for 12 years and held the rank of tenured Associate Professor. While at the University, she continued her education in the Doctoral Program. In 1977, she returned to the Northland and accepted the position of Director of Nursing Education and later Nursing Services at St. Luke's Hospital. In 1979, she married her husband, Louis, and in 1981 she was recruited for the position of Nursing Education Director at St. Joseph Medical Center in Burbank, CA. She was also a member of the Advisory Board at several Community Colleges in the area. She completed doctoral study at Columbia Pacific University and graduated with a Ph.D. in Education with a major focus on Nursing Education. Dr. Marshall was a consultant to nursing schools in several states and was appointed to the Iowa State Board of Nursing for five years. While spending four years in Guam as Director of a Medical Center, she developed policies and standards for the first Board of Nursing in Guam and directed its activities for several years. Before retiring, Dr. Marshall had received a distinguished service award from St. Louis University; a Service Recognition Award for Outstanding Professional Achievement from the California Board of Nursing being noted for her academic and clinical research along with publications. Rita was an active member of the American Nurses Association and the National League for Nursing throughout her professional nursing years. After retiring, she joined the volunteer staff at hospitals in California and later in Arizona. She also was a volunteer instructor for the religious education programs at the local Catholic churches. Dr Marshall always loved books and spent many leisure hours reading. She was a devout Catholic and member of St. Lawrence Catholic Church. She was a Franciscan Associate, a member of the Catholic Daughters of America, Legion of Mary Auxiliary, National Pro-Life Alliance, held perpetual membership in several Missionary Associations and was a Charter member of the Pope John Paul II Cultural Center in Washington, DC. Rita was preceded in death by her parents and ten siblings. Locally, Rita is survived by husband, Louis; sister, Rose Colpaert and Rose's children, Rita Michon, Diane Johnson Veldman and Gary Colpaert; nephews, Bill Meys, Steve Laverdiere, Brian Laverdiere and their families; Rita has many nieces and nephews across the nation. With grateful hearts, the family would like to thank Natalie, Keystone Bluffs staff, St. Mary's Hospice, with a special hug to Bill and dog, Jack, and the Lake Superior House staff of Diamond Willow. We will miss the twinkle in your eyes. In lieu of flowers, memorials to the Shriners Hospitals for Children would be appreciated. Visitation will be from 10 a.m. until the 11 a.m. Mass of Christian Burial Thursday, December 18, 2014 at St. Lawrence Catholic Church, 2410 Morris Thomas Road. Rev Fr William Fider officiating. Arrangements by Williams Lobermeier Boettcher Funeral Home.

To send flowers to the family in memory of Rita Marshall, please visit our flower store.