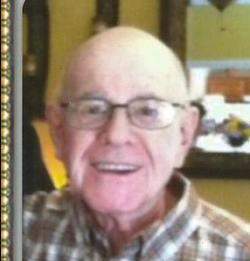 Robert William "Bob" Wheeler, 83, of Duluth, died on Feb. 8, 2016. He was born March 14, 1932 to Robert and Elizabeth (Bienusa) Wheeler. He had been employed by Coolerator, Dewitt-Seitz and Zalk Josephs, from which he retired in 1994. He was the Steelworkers Union president there. He later worked at K-Mart in West Duluth. He was an U.S. Army veteran and served in Germany during the Korean War. He was a member of the American Legion and VFW. Bob married Sharlyne Wagner in 1960. He enjoyed bluegrass music, and played the fiddle. He also enjoyed sports and favored the St. Louis Cardinals, and the MN Wild Teams. He was an avid reader, and knew more car facts than many sales people. He is preceded by his parents, twin, Rodger, sisters, Evelyn Anderson and Maryann Handris. He is survived by his wife, Sharlyne, daughters, Teresa "Teri" Wheeler and Leah (Mark) Seefried. Grandchildren, Blake and Brooke Leighton and Brandy Seefried, sister Dorothy Erickson and several beloved nieces and nephews. The family would like to thank the staff at St. Luke's and Bayshore for their kind care. Private family burial with military honors accorded by the Duluth Combined Honor Guard will be at Oneota Cemetery.

To send flowers to the family in memory of Robert Wheeler, please visit our flower store.