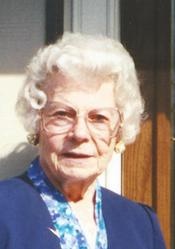 Roberta Mae "Berta" Johnson, age 99, of Duluth, passed away on Monday, October 15, 2012. She was born on July 3, 1913 in Mountain Iron, Minnesota, the daughter of Roy M. and Jessie I. Baker. Roberta graduated from Chisholm High School and attended Hibbing Junior College. Roberta and Carl, her future husband, met while both worked for Marshall Wells Co. in Duluth. When Carl was transferred with the company to Spokane, Washington, Berta soon joined him there for their marriage on March 19, 1937. They moved with the company, living in Portland, Oregon and returning to Duluth in 1949. Roberta was a secretary for Marshall Wells, Duluth Rotary Club, UMD, and General Electric. She retired in 1978 from the Duluth Clinic where she was a medical secretary. Roberta was a member of Lakeside Presbyterian Church where she was an Elder, a Sunday school teacher and a member of the Rhoda/Martha Circle. She enjoyed playing Bridge, Garden Club, square dancing, taking her daily walks, was a wonderful cook and loved spending time with her family and friends. She was preceded in death by her parents, siblings, Catherine Mooster, Virginia Rudstrom, Ralph Baker, Mary Ella Lindvall and John "Jack" Baker; and beloved husband, Carl Ernest Johnson in 1970. She is survived by two sons, Roger (Sharon) of Corona, California, and Dennis (Linda) of Duluth; a daughter, Deanna (Jay) Atherton of San Diego; a sister-in-law, Mary Baker of Woodbury, Minnesota; six grandchildren, Kelly (Carl) Wilson, Pamela (Steve) Blackwill, Karla (Rob) Terry, Angela (Matt) Duffy, Brooks Atherton and Kevin (Rosario) Atherton; six great-grandchildren, Joshua, Nathan, Pamela, Nichole, Yahaira and Tyler; one great-great grandchild, Luicee. The family would like to give special thanks to the caring staff at Edgewood Vista in Hermantown and the special team members of Essentia Health Hospice. Visitation with the family at 10 a.m. until the 11 a.m. Memorial service on Monday, October 22, 2012, at Lakeside Presbyterian Church, 4430 McCulloch St., Pastor Kari Jutila officiating. Burial in Park Hill Cemetery. Memorials to Lakeside Presbyterian Church or donor's favorite charity would be appreciated. To sign the guestbook online, visit www.wlbfuneralhome.com. Arrangements by Williams Lobermeier Boettcher Funeral Home.

To send flowers to the family in memory of Roberta Johnson, please visit our flower store.