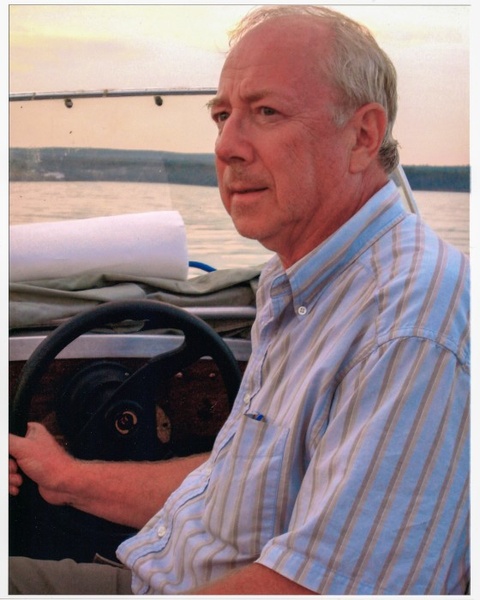 Born in 1942, Roger was the second child of Ella and Vernon Kinetz.  He grew up in West Duluth, was confirmed at St. Paul’s American Lutheran Church, and graduated from Denfeld High School in 1960 and later from UMD in 1967.  That same year, he married Margaret, the mother of his three children.

Roger worked as an accountant for many companies large and small.  One of his most successful roles was as an instructor at Duluth’s “Vo Tech” where he made many lifelong friends and had a lasting impact on his students.

From a young age, he developed a love of the outdoors.  He learned from his father and uncles and passed his passion on to his children.  In particular, he loved fishing and even in his last days longed for one more chance to get out on Lake Superior.  As a teenager, he spent his summers on his aunt’s farm in Wrenshall, MN.  Years later, he bought the same farm and lived there with his family.  He loved his crops, his vegetable gardens, and his livestock.  He was known for experimenting with new ideas.  A trait that left him over the years with a cellar full of cabbage, a hand-made canoe, and a field full of pheasants.  He made many canoe trips into the Boundary Waters.  At first with friends from high school and college, later with his children, and most recently, he was able to take one last trip in with one of his grandsons.  It’s fair to say all his grandchildren have a love of fishing that is directly attributable to Roger’s passion.  While his later years were spent in the Twin Cities area, he has always been a country boy at heart.

He loved politics, kept up on current affairs, and always appreciated a good discussion around what was going right and wrong in the world.  He enjoyed sharing his love of music, often louder than those around him might have preferred.  From Willie Nelson to Yanni, he responded to any melody that moved him.  He was a good cook, never sparing the butter, and his popcorn balls and pig’s feet will be missed.  He appreciated sports and was thrilled to see the Bulldog hockey team finally win some national championships while lamenting the Vikings Super Bowl misfortunes.  He also loved catching Minnesota Wild games whenever he could.  His children and grandchildren will miss him on their rides up the North Shore of Lake Superior, with the regular stop at Stony Point, followed by a Sammy’s pizza.

Preceded in death by his parents and son Ross, Roger is survived by his son Brent (Lotta) Kinetz and their sons Bo and Hugo of Stockholm, Sweden; daughter Jennifer Kinetz and her children Lila and William Mueffelmann of Telluride, CO; former wife Margaret Kinetz of Duluth; brother James (Marilou) Kinetz of Redondo Beach, CA; sister Barbara (Art) Boline of Esko; nieces Lisa Kinetz, Erika (Dino) Kinetz, Kate (Tony) Krogen; nephew Chris (Christine) Boline; along with many cousins and friends.  In the end, he had a big impact on some, was loved by many, and gave whatever he could to those in need.

A memorial gathering will take place at the Williams-Lobermeier-Boettcher Funeral Home, 3208 W 3rd Street in Duluth on Saturday, May 11th, 2019 between 3 and 5pm.  All are welcome to share a memory of Roger if they wish.  He will be buried next to his son Ross at Forest Hill Cemetery in Duluth.

The family wishes to thank the team at the U of MN Cardiovascular Services Unit for their incredible care and compassionate support.  In lieu of flowers, they ask you consider a donation to the Minnesota Land Trust in Roger’s name.

“Leave me if you need to.  I will still remember.”- Willie Nelson, Angel Flying Too Close to the Ground

To send flowers to the family in memory of Roger Kinetz, please visit our flower store.