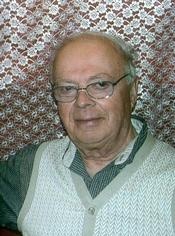 Roger H. Nelson, age 84, Duluth, died November 4, 2013 at Golden Oaks in Proctor. He was born in Duluth on September 3, 1929 to Fred and Victoria Nelson. Roger was a 1947 graduate of Denfeld High School. He married Helen MacInnes in Duluth on January 22, 1949. He had worked for the DW&P Rail Road for 40 years, retiring as a Supervisor. His hobbies were fishing, camping and traveling in his RV. He was preceded in death by his parents, wife Helen on May 11, 2013, sister Hazel Noreen and brother John. Roger is survived by his daughter Kerry Nelson, sons Ross(Marta)Nelson, Tom Nelson and Robin Nelson, 5 grandchildren and 3 great-grandchildren. Visitation 10AM until the 11AM Funeral Service Saturday November 9, 2013 at Elim Lutheran Church, 6101 Cody St., Duluth. Burial at Oneota Cemetery.

To send flowers to the family in memory of Roger Nelson, please visit our flower store.