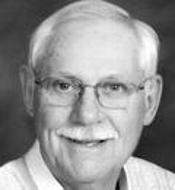 Ronald Dean Benson, 77, Duluth, died August 2, 2012 at Essentia Hospice. He was born in Barronette, WI, on March 9, 1935 to Robert and Annie Benson. Ron was a 1953 graduate of Morgan Park High School. He married Donna Kervina in Duluth on May 18, 1957. Ron had retired from U S Steel after 40 years of service. He was an active member of United Protestant Church, serving as a Trustee and member of it's Men's Club and member of the Gary-New Duluth Community Club. Ron enjoyed his grandchildren and attending their sports activities. He was also an avid hunter and fisherman. He was preceded in death by his parents and brother Marshall. Ron is survived by his wife of 55 years, Donna, children Kathy(Kevin) Behm, Duluth, Jeannie Powell, St. Cloud, Dean(Susan)Benson, Hermantown, grandchildren Kari(Jason)Rengo, Kylie(Dan)Enfield, Josiah and Jacob Powell, Christopher and Natalia Benson, great-grandchildren Kayden, Karter and Kalysta Rengo and brothers Keith(Gerri), Duluth and Wayne(Linda), Great Falls, Montana. Visitation 9:30 AM until the 11 AM funeral service Monday at United Protestant Church, Morgan Park. At Ron's request memorials to United Protestant Church, in care of the family, are preferred. Burial at Oneota Cemetery. Arrangements by Williams-Lobermeier-Boettcher Funeral Home.

To send flowers to the family in memory of Ronald Benson, please visit our flower store.