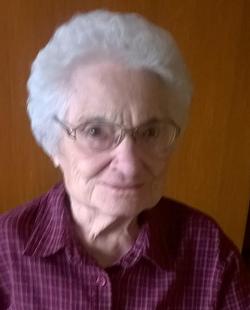 Rosalie Nys Alstadt, 102, passed away peacefully February 26, 2017 at Marywood Apartments on the campus of St. Scholastica. Rosalie was born October 4, 1914 in Ishpeming, Michigan to Leo and Georginia Nys. She moved with her family to Morgan Park in Duluth when she was 2 years old. She was a graduate of Morgan Park High School and Duluth Teachers College majoring in Elementary Education. Her first teaching position was in Solen, North Dakota in a rural school. She returned to Minnesota the following year where she spent most of her time in Pine Hill School. There the teachers lived upstairs over the classrooms. It was at this time that her brother Earl was killed in France, so Rosalie transferred to Proctor Schools, where she would be able to live at home with her folks. She married Marcus Alstadt July 16, 1946 when he returned after serving 4 years in the ETO. After their children were in school all day she entered UMD where she earned a BS Degree with honors in Elementary Education. Her first position in Duluth was at Longfellow School which was torn down after her first year, then she transferred to Stowe where she remained for 19 years until she retired. After leaving teaching she became an Income Tax Councilor in Morgan Park for 15 years. She also volunteered at Lake Haven and Stowe School. Rosalie returned to Election judging, which she had done while raising her family. She'd been an election judge over 25 years. She has been a Girl Scout Leader, 4H Club Leader, as well as a member of the St. Margaret Mary Parish, Degree of Honor, Happy Wanderers, Y-Tec, Church Council, Post Home, VFW, DAVA, United Steelworkers auxiliary and Spanish American auxiliary. Her father was a Spanish American War Veteran. She enjoyed cruising and took many cruises with family members and friends to Western, Eastern, and Southern Caribbean as well as to Hawaii, Panama Canal, Alaska, Southern Europe, Canada and New England. Las Vegas was another favorite spot she visited several times and visited cousins there. Rosalie was preceded in death by her husband, Marcus in 1984; her parents; a sister, Adeline (Edward) Gamble and three brothers, Francis (Marge) Nys, Leslie (Kay) Nys and Earl Nys. She is survived by two daughters, Marilyn (Paul) Fleming of Duluth and Arlene Alstadt of Brooklyn Park, Minn; grandchildren, Renee (Dennis) Looney and Ryan Fleming. The family would like to thank the Marywood, Westwood and Essentia Hospice staffs for their thoughtful and special care. Visitation 9:30 until the 10 a.m. Mass of Christian Burial Monday, March 6, 2017 at St Elizabeth Catholic Church, 610 99th Ave West. Fr. Thomas Foster officiating. Burial in Calvary Cemetery, Superior, Wisc. To sign the guestbook on-line, visit www.wlbfuneralhome.com. Williams Lobermeier Boettcher Funeral Home is entrusted with final care.

To send flowers to the family in memory of Rosalie Alstadt, please visit our flower store.