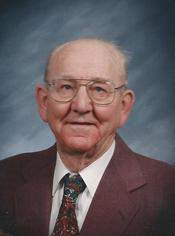 Roy William Stromgren, 87, died at home in Duluth surrounded by his loving family on January, 22, 2013 following complications from Parkinson's Disease.

Roy was born April 2, 1925 in Duluth to Olaf "Bill" and Christine Stromgren.

Roy served in the U.S. Army during World War II and survived the Battle of the Bulge. He returned home to work with his father at Grand Provision before going into partnership at the Woodland Piggly Wiggly as the meat manager.

Roy married his best friend Lois Bjerke (LJB) on April 10, 1948 and they enjoyed nearly 65 years of marriage. Roy and Lois purchased the Hermantown General Store in 1960 and worked there until retirement in 1991. Roy was a handyman, a mechanic and really enjoyed using his many skills to help the people of the Hermantown area.

Roy enjoyed automobiles and motorcycles, loved to learn from others and managed various rental properties. He traveled to Washington D.C. with his son David on the Honor Flight on September 25, 2012.

Roy lived for his family and had a wonderful life.

His family would like to thank Dr. Michael Heib, Dr. Jason Buffington, Linda Anderson, NP, St. Mary's Hospice Team (Mike and Patty for their loving and compassionate care) and the Duluth Fire Department. Visitation 10AM until the 11AM funeral service Saturday at Asbury United Methodist Church. Inurnment Oneota Cemetery. Arrangements by Williams- Lobermeier-Boettcher Funeral Home, service officiated by Pastor Cindy Rassmusen. In lieu of flowers, memorials may be made in Roy's name to Asbury United Methodist Church, St. Mary's Hospice or Shriners Hospitals for Children.

To send flowers to the family in memory of Roy Stromgren, please visit our flower store.