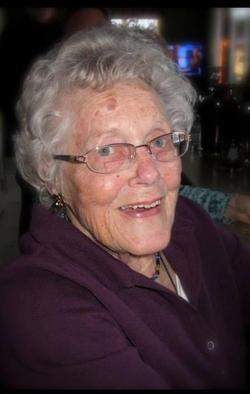 Ruth F. Hanson, 99, formerly of Haines Rd, died Monday, August 10, 2015 at Viewcrest Health Center. She was born in Duluth on May 12, 1916 to Frank and Anna (Bloomberg) Anderson. Ruth grew up in Duluth and married Howard G. Hanson on January 15, 1944 in Elim Lutheran Church in Duluth. Ruth was an active member at Salem Lutheran Church for over 60 years and a member of the Esther Circle. She was also a member of Eastern Star. Ruth loved taking care of her family and home. She and Howard enjoyed traveling, especially with a group of friends which were members of the Aad Temple Shrine. They also enjoyed camping and spending time with family in Rapids City SD and Rochester NY. Ruth treasured her role as grandmother and great-grandmother. She was preceded in death by her parents, her husband of over 56 years, Howard; two sisters, Elna Benson and Irma Savola; a son-in-law, Joseph A. Floreano and dear friend, Dolly Peterson. She is survived by a daughter, Carol Floreano and a son, Scott (Nancy) Hanson; four grandchildren, Anthony (Kimberly) Floreano, Jason (Lisa) Floreano, Emily Hanson and Ryan Hanson; six great-grandchildren, Alexandra, Madison, Brynn, Anna, Brayden and Lucas; nieces and nephews. Visitation 10 until the 11 a.m. funeral service Thursday, August 13, 2015 at Salem Lutheran Church, 4715 Hermantown Rd. Pastor Richard Hane officiating. Burial at Oneota Cemetery. Memorials to the YMCA Foundation or of your choice would be appreciated. To sign the guestbook on-line, visit www.wlbfuneralhome.com. Williams Lobermeier Boettcher Funeral Home is entrusted with final care.

To send flowers to the family in memory of Ruth Hanson, please visit our flower store.