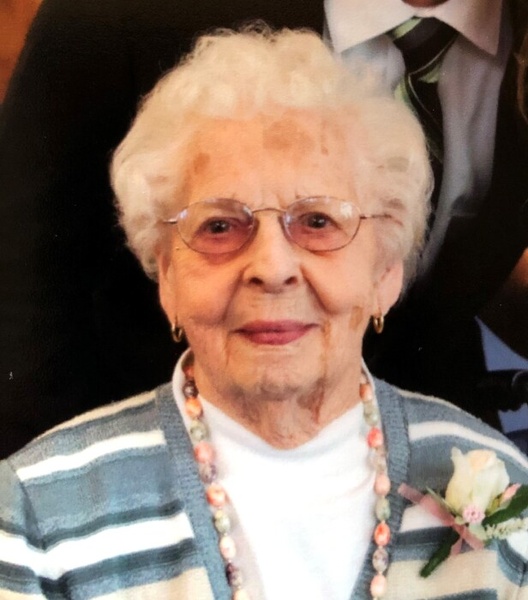 Ruth E. Peterson, 93, went to be with her Lord on Monday, November 29th, 2021.  Ruth was born in Duluth, MN to Emil and Emma Ziemer, one of the pioneering families in the Duluth Heights. She remembers chores of picking weeds and rocks from the garden, helping care for the chickens and cow, and helping with haying on the family farm. She walked to Lowell Elementary School and later attended middle Franklin Middle School for grades 7-9 before she going work as a waitress at the Atlas Tea Room at age 15.  She learned to cashier at Piggly Wiggly grocery store and later worked at Western Electric soldering wires to frames.  It was there where she met her husband, William “Bill” Peterson.  Together they raised three children at which time she returned to cashiering at B & B meats and Fichtner’s Meats & Sausage, from which she retired.

Ruth’s hobbies included music (she played the accordion) and sewing.  She enjoyed looking at cookbooks and trying new recipes. She loved watching the wildlife around her home and always had a dog.  She was a long time member of Christ Lutheran Church.

She was preceded in death by her husband; parents; brothers, Herman and George Ziemer; sister, Lydia Olson (Earl); and son, Dennis.  Ruth is survived by daughters, Diane (Michael) Swanoski, and Debbie Peterson DeRocher of Duluth; sisters, Arlene and Carol Ziemer of Duluth; nine grandchildren; nine great grandchildren; a niece, and a nephew.

Thank you to Beehive Assisted Living and Kindred Hospice for their compassionate care. Arrangements by Williams Lobermeier Boettcher Funeral Home 218-6241059

To send flowers to the family in memory of Ruth Peterson, please visit our flower store.