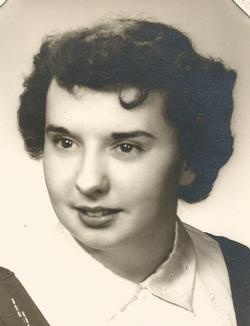 Ruthanne C. (Miller) Norton, 78, of Duluth, passed away on Monday, January 5, 2015. She was born on Christmas Day 1936 in Traverse City, Michigan to Theodore and Ruth (Thomas) Miller. She graduated from Creston High School in 1956, Grand Rapids Junior College, Grand Rapids, Michigan in 1958 and Western Michigan University with a B. A. Degree in English in 1960. Her marriage to Basil D. Norton took place in the Catholic chapel on the grounds of the Michigan Veterans Facility in Grand Rapids, Michigan on August 20, 1960. She taught English in Muskegon, Michigan and English and Drama at Vermontville High School, Vermontville, Michigan before moving with her husband to Chicago,, Illinois where he was employed as a Zoologist at Lincoln Park Zoological Gardens. In 1967 she moved from there to Duluth, Minnesota when her husband took the position as Director of the Lake Superior Zoo. Ruth, as she liked to be called, was the owner of Elfinfair Kennels from 1989 to 2000 where she bred and boarded Yorkshire Terriers. Meeting the people who came to her door to get a companion puppy for their home was joy to her. She loved seeing and talking with people. Many sent her pictures of themselves and their family with their dog holding center attention. She kept the pictures in a scrapbook. She also was the first of the docents at the Lake Superior Zoo although she was never acknowledged as such. Help was needed in raising baby animals that were rejected by their parents and she filled the void until the Duluth Zoological Docents were formed in 1975. Lion-Tailed Macaques were special for her, all five of them, along with Ziggy, a Celebes Ape and Kippy, a DeBrazza Guenon. Ruth loved to read, work on the family genealogy for her children and grandchildren and for many cousins spread near and far. She learned to use a computer when she was in her mid 60's. She was a member of Holy Cross Church, Good Shepherd Catholic Church where she worked on the liturgy committee for 6 years and enjoyed every moment. After Good Shepherd Closed, she attended St. Elizabeth Church. Preceding her in death were her parents; her brothers, Thomas Miller and Dr. Theodore P. Miller, and her sister, Marian E. McIntyre. She is survived by her husband Basil; her children whom she loved very much, Todd (Kayoko) Norton of Pomona, California, Amy (Loren) Mustache of Duluth and Gregory Norton of Duluth; a sister, Mona E. (Dale) Alger of McKinney, Texas. She also leaves many special nieces and nephews. Her nephew Gene McIntyre and his wife Lorna were dear to her heart as were her granddaughters; Toni, Emily, Tasia, Christa, Breanna and Jolie-Sage, and great-grandchildren Aydan, Charlotte and one on the way. Special friends of family Jill, Scott and Matthew Markee. The family would like to thank the Doctors and Nurses at Essentia Health St. Mary's for the wonderful care they provided. It would be most appreciated by the family, if in lieu of flowers, memorials may be made to one of the following, the Animal Humane Society in Duluth, the Lake Superior Zoo's Education Fund or to the Damiano Center. Visitation will be from 10 until the 11 a.m. Mass of Christian Burial Monday, January 12, 2015 at St. James Catholic Church, 721 North 57th Ave West. Rev Fr James Bissonette officiating. Burial in Oneota Cemetery. To sign the guestbook on-line, visit www.wlbfuneralhome.com. Arrangements by Williams Lobermeier Boettcher Funeral Home.

To send flowers to the family in memory of Ruthanne Norton, please visit our flower store.