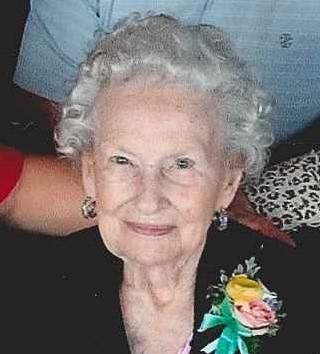 Shirley Irene Carlson, 93, formerly of Hoover St, died Thursday, August 2, 2018 at the Viewcrest Health Center surrounded by her family. She was born in Cloverton, MN on March 12, 1925 to William and Ruth Sperling. Shirley moved to Duluth at the age of 15 and was a Central High School graduate. She attended secretarial school in Duluth. She retired from Glass Block where she had worked for many years. She was a member of the Lutheran Church of The Good Shepherd, Order of the Eastern Star and the Job’s Daughters mother’s club. Shirley enjoyed cooking, camping, hunting, fishing and mostly spending time with her family. She was preceded in death by her parents; her husband, Melvin; two brothers, Dale and Tom Sperling and a sister, Marge Armstrong. She is survived by her daughters, Susan L (Richard) Hood of Frisco, TX and Sandra L. (Allan) Pint of Brooklyn Park, MN; two sons, William H. (Linda) of Blaine, MN and John M. (Nancy) of Duluth; two sisters, Pat Sperling of St. Paul and Virginia Hills of Siren, WI; a brother, Mike Sperling of TN; her grandchildren, Pamela, Thomas, Trina, Kristen, Chris, Daniel, Tawnya, John, Tara and Tricia; 15 great-grandchildren and 4 great-great-grandchildren. Visitation 12 noon until the 1 p.m. funeral service Monday, August 6, 2018 in Williams Lobermeier Boettcher Funeral Home. 3208 West 3rd St. Duluth, MN. Burial in Oneota Cemetery. Memorials to Parkinson’s Research would be appreciated.

To send flowers to the family in memory of Shirley Carlson, please visit our flower store.