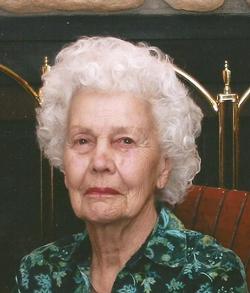 Shirley B. Isabell, 94, of Duluth, died Tuesday, October 13, 2015 in Lighthouse at Cloquet. Shirley was born in Duluth on March 10, 1921 to Gustaf and Ruby (Elsesser) Gustafson. She was a graduate of Denfeld High School and attended Duluth Business College. She was a secretary for the Frasier Shipyard in Riverside and was a "lunch lady" at Denfeld High School. She loved spending time with her family and enjoyed ballroom dancing, traveling and reading. She was preceded in death by her parents; her husband, Joseph; a son, Robert; brothers, Robert and Gale; a sister, Jean Gustafson. She is survived by her children, Cheryl (Butch) Liebaert of Superior, James (Cindy) of Proctor and Jon of Woodbury, MN; six grandchildren and ten great-grandchildren. Visitation 1 until the 2 p.m. Memorial Service Saturday, October 17, 2015 in Williams Lobermeier Boettcher Funeral Home. To sign the guestbook on line, visit www.wlbfuneralhome.com.

To send flowers to the family in memory of Shirley Isabell, please visit our flower store.