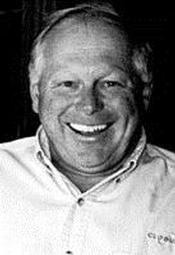 Steve Anderson, a true "King of Hearts", passed Friday, May 11, 2012, surrounded by his loving family and friends at the age of 59. Steve was many things to many people: a husband, a father, an uncle, a brother, a cousin, a friend, a mentor, and a living example of how a person should live their life. Steve LIVED his life. If you asked him how he was, his response was always, "livin' the dream." Son of Lloyd and Dorothy Anderson, Steve was born and raised in Duluth and graduated from Denfeld High School in 1971. While at Denfeld, he was a three-sport captain and letter winner of hockey, football, and baseball, homecoming king, and scholastic achiever. He later went on to attend UWS where he served as captain of the hockey, baseball and golf teams. Steve experienced many accolades in his collegiate athletic career but was most proud of winning the 1976 NAIA College National Hockey Championship and being recognized as an All-American in baseball. In 2004 Steve was inducted into the UWS Hall of Fame. He spotted Nancy, his "Nano" at age nine and knew she was the one he was going to marry. They married in 1976 in Duluth and raised three children. Steve's family was his ultimate pride and joy. Steve has been a dominant figure in the golf community throughout the Northland where his passion for the game allowed him to turn it into a career. He was a golf professional at four courses throughout the Northland, most recently Ridgeview Country Club, where he worked side-by-side with his son, Aaron. Steve had a personality that was larger than life. His vice-grip handshake, class-act manners, and extreme generosity served as an example of a royal gentleman. He was a natural born leader; a man whose influence heightened the lives of everyone he came across. In the presence of Steve, your smile became wider, your laugh became livelier, and your outlook on life became brighter. Steve lived his life with dignity, integrity, compassion, and humility. His gregarious spirit will be greatly missed, but as he always said, "the best is yet to come." He was preceded in death by his parents. Steve is survived by his wife, Nancy; children Jennifer (Wade) Freeman of Duluth, Aaron of Duluth, and Julie of New York, N.Y.; brother Rick (Karen) Miller of Cotton; mother- and father-in-law Peggy and Jim Hill; and many treasured brothers-in-law, sisters-in-law, nieces, nephews, and close friends. A CELEBRATION OF STEVE'S LIFE: 1 p.m. Wednesday May 16, in Zion Lutheran Church, Duluth. Memorials in care of the family preferred. A future foundation will be established in honor of Steve's legacy. Arrangements by Williams-Lobermeier-Boettcher Funeral Home.

To send flowers to the family in memory of Steve Anderson, please visit our flower store.