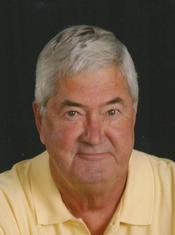 Terrance C. "Terry" Johnson, 72, Duluth, died December 16, 2013 at his home surrounded by his family. He was born in Duluth on October 19, 1941, to Clarence "Bud" and Ellen Johnson. Terry was a graduate of Denfeld High School and served in the Navy from 196l-1965, during the Viet Nam War. He married his Polish bride, Marcia Stevens, in Duluth. Terry had worked for N W Bell, retiring after 41years of service. He was a member of Holy Family Catholic Church, American Legion Post #71, coached Youth Hockey and was a Boy Scout Leader. He is preceded in death by his parents. Terry is survived by his wife of 44 years, Marcia, daughter Dawn(Scott)Earls, Duluth, sons Jim(fiancAC. Carleen), Duluth, Todd(Cathy)Duluth and Darren(Christine), Colorado Springs, Colo, brothers Ron, Gary, Tom and Rick, all of Duluth, 9 grandchildren, many nephews and nieces and rocker buddies Cleo and Rocky. Visitation 5-7PM Thursday at Holy Family Catholic Church, 2430 W. 3rd ST, Duluth and continues from 10AM until the 11AM Mass of Christian Burial Friday at Holy Family. Burial at Polish Catholic Cemetery. Military Honors Accorded by the Combined Duluth Honor Guard. Arrangements by Williams-Lobermeier-Boettcher Funeral Home.

To order memorial trees or send flowers to the family in memory of Terrance Johnson, please visit our flower store.