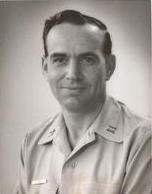 Lt. Col Theodore "Ted" Plant, USAF(Ret), age 89, Duluth, died October 9, 2013 at his home. He was born in Duluth on August 1, 1924 to Edward and Julia Plant. He was a 1943 Graduate of Denfeld High School. Ted was an Army Veteran of WWII and fought in the Normandy Invasion. He also was awarded a Purple Heart during the Battle of The Bulge. Ted joined the Air Force in 1947 and was an original member of the 179th FIS, MN Air Nat'l Guard. He served in the Korean and Viet Nam Wars and retired in 1981 as a Lt. Col. Ted was a member of Westminster Presbyterian Church and Am Legion Post #71. Ted is preceded in death by his parents, his wife of 62 years, Helen, sister Lois Long and brothers George, Donald, Robert and Edward Jr. He is survived by his nieces Yvette Bryant, Leesburg FL, Jacqueline Whalen, Duluth, Lynda Gardner and Debbie Plant, Ocklawaha, FL, and nephew Steven Plant, Marion N.C. Visitation 10AM until the 11AM Memorial Service Wednesday at Our Savior's Lutheran Church, Duluth. Burial at Ft. Snelling Nat'l Cemetery. Military Honors Accorded by the combined Duluth Honor Guard. Arrangements by Williams-Lobermeier-Boettcher Funeral Home.

To send flowers to the family in memory of Thedore Plant, please visit our flower store.