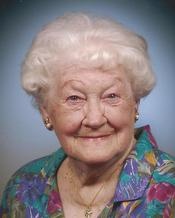 Theresse "Emerald" Kregness, 96, of Greysolon Plaza, our jewel of a mother, died Saturday, March 23, 2013 at Solvay Hospice House. She was born on May 19, 1916 in Fertile, Minn to Bert and Trine Davis. Emerald spent her childhood in Fertile and moved to Duluth in 1929, graduating from Duluth Central High School in 1935. She married Roger G. Kregness in Duluth on June 14, 1941. Emerald worked for the Duluth Public Schools in Food Service from 1965 until her retirement. She was a member of First Lutheran Church, the Leah Circle. She enjoyed knitting, crocheting, was the family Lefse maker, a great letter writer, card sender and volunteer at church. She lived independently in her apartment at Greysolon Plaza until her illness in January and participated in swim classes at Miller Dwan until age of 94. She was preceded in death by her parents, husband, Roger in 1965, brothers, John, Clarence, Philip, Werner and Jerome; a sister, Mildred Bergin. She is survived by her daughters, Patricia D. (Clinton J) Johnson of Duluth and Pamela J Potthier of Superior, Wisc; grandchildren, Ronald Potthier of Oklahoma, Stacey Potthier of Mpls, Clinton R. (Jennifer) Johnson of Duluth, Amanda T. (Scott) Wirta of Grand Rapids, MN and Emily L. (David) Wigg of Duluth; great grandchildren, Zoe and Kenya Potthier, Mariah, Zachary and Andrew Johnson, A.J. Wigg and Quinn Wirta. "Til vi modes igjen!" Visitation will be from 10 until the 11 a.m. funeral service Monday, April 1, 2013 in First Lutheran Church, 1100 East Superior St. Burial in Park Hill Cemetery. Memorials to First Lutheran Church or Solvay Hospice House would be appreciated. Arrangements by Williams Lobermeier Boettcher Funeral Home.

To send flowers to the family in memory of Theresse Kregness, please visit our flower store.