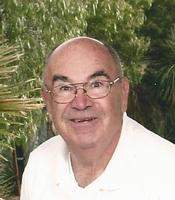 Thomas M. Trousdell, 83, of Duluth, MN, formerly of Mercer, WI, died Thursday, July 12, 2012 in Chris Jensen Health and Rehabilitation Center. He was born in Cincinnati, OH on June 19, 1929. Thomas graduated from the Leelanau School in Glen Arbor, Mich. He was a U. S. Army Veteran serving during the Korean Conflict. He received his B.A. Degree from the University of Cincinnati and his Masters of Education Degree from the University of Miami-Ohio. Thomas was a teacher, principal and administrator for various schools including the Lotspeich School in Cincinnati, OH; University School of Shaker Heights, OH; Albion Elementary School of North Royalton, OH; and Essexville-Hampton Public Schools in Michigan. He was a College Administrator at Gogebic Community College in Ironwood, MI for seven years and retired in 1986 from Lansing Community College where he was an administrator for nine years. Thomas was a standout downhill ski racer in high school and enjoyed many outdoor activities including swimming, golfing, hunting and fishing. His love for the outdoors and free time in the summers, led him to buy the Thunderbird Boys Camp in Canada where he and his wife Betty were the camp directors. Family was very important to Thomas and he enjoyed playing cards and cribbage and always had a sense of humor. In his later years, he and his wife would spend winters in Sun City, AZ and summers in Mercer, WI. While in Arizona, Thomas took up Silversmithing and traveled to many craft shows. He was preceded in death by his father, Thomas Egan; his mother, Catherine Egan Trousdell and step father, Henry Trousdell, his first wife, Betty (1991) and second wife, Lee (2002). He is survived by a son, Roy (Patti) Trousdell of Duluth, MN, a daughter, Judy Trousdell of Rochester, MN; and a granddaughter, Chantelle Trousdell of Maple Grove, MN. Visitation will be from 1 until the 2 p.m. memorial service Saturday, July 21, 2012 in Williams Lobermeier Boettcher Funeral Home at 3208 W 3rd St, Duluth, MN. Burial in Oneota Cemetery with Military Honors accorded by the Duluth Combined Honor Guard. Memorials to the American Lung Association or donor's choice would be appreciated. To sign the guestbook on-line, visit www.wlbfuneralhome.com.

To send flowers to the family in memory of Thomas Trousdell, please visit our flower store.