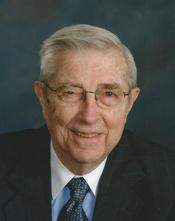 Vernon R. Verhel, age 89, Duluth, died peacefully at Solvay Hospice House in Duluth on Tuesday July 17, 2012, surrounded by his family. Vern was born on December 8, 1922, in Duluth, Minnesota, to Emil and Marie Verhel. He graduated from Denfeld High School in 1941, spent two years at Duluth Junior College before serving over three years in the U.S. Army during WWII. He served with the Far Eastern Air Force in the South Pacific, New Guinea and the Philippines. Upon his return, he attended Salter Vocational School and completed the Automotive Technology program. He later received his Bachelor of Science degree at the University of Minnesota, Duluth. Vern was united in marriage to Mary Ann Garay on June 18, 1949 in Superior, WI, and they spent sixty three loving years together. Vern worked sixteen years plus for Arrow Chevrolet and twenty three years teaching automotive technology at what is now Lake Superior College in Duluth. Since retiring in 1985, he has been active in his church, Holy Family Catholic Church, as finance secretary, funeral mass server, weekend mass collection counter and many other functions. He loved doing things with family and friends. He is preceded in death by his parents, brother, Albert and numerous relatives. He is survived by his wife Mary Ann, sons Gene (Lynnette), Bill (Lee Ann), daughter Lynda (Clyde) Lagergren, seven grandchildren, five great-grandchildren and many nieces and nephews. He will be deeply missed by family and friends. The family wishes to thank the staff at Solvay Hospice House for their outstanding care and support for Vern and his family. Visitation Thursday 5-7PM with Rosary at 6:30PM, all at Holy Family Catholic Church, 2430 W. 3rd St., Duluth. Visitation continues at the church Friday from 10AM until the 11 AM Mass of Christian Burial at Holy Family. Burial at Oneota Cemetery. Military honors accorded by the Combined Duluth Honor Guard. Arrangements by Williams-Lobermeier-Boettcher Funeral Home. Donations may be made to the Holy Family Catholic Church Building Fund or Solvay Hospice House, in care of the family.

To send flowers to the family in memory of Vernon Verhel, please visit our flower store.