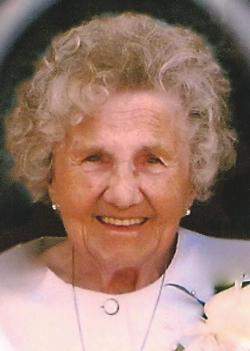 Virginia Doris Carlson, 91, of Hermantown, went home to be with her Lord Saturday, June 27, 2015. Born in Duluth on January 7, 1924, she was the second child of Edward and Eleanor (Lundberg) Anderson. Virginia graduated from Denfeld High School in 1942. After graduation she worked at the Minnesota National Bank until her marriage to Bert Carlson on June 1, 1946. She attended First Covenant Church all of her life, becoming a member in 1938. For many years she played her marimba there, sang in the church choir, taught Sunday School, and served on several boards, including Covenant Women, Friendly Folk, and the Deacon Board. She catered many weddings, other special events, and for fourteen years was in charge of serving coffee and lunch after funerals, working alongside her husband and friends from the church. She was a former member of the Hermantown homemakers and of Top Notchers. She will forever be remembered for the great love and devotion she had for her family, the tender way in which she cared for them and others, her quick wit, great sense of humor, warm smile, and twinkling eyes. Her wonderful cooking and baking abilities were enjoyed by many as she graciously entertained family and friends with pancake breakfasts, smorgasbords, and sit down dinners in her home. Many will also remember stopping by the house to enjoy fruit salad, spam buns, and chocolate malts, and right before Christmas, sharing in Dopp i grytan or "dipping of the bread." Virginia was preceded in death by her parents; husband of nearly fifty-five years; sister, Everiene (Andy) Carlson; brother, Bruce (Lois) Anderson, and son-in-law, Jerry Smith. She is survived by her two daughters, Linda (Jeff) Crider of Hermantown and Janet (Gary) McLain of Cloquet; five grandchildren, Chuck (Kim) Crider, Amy (Brian) Vittorio, Tina (Paul) Stromquist, Jesse (Anna) Smith and Holly (Troy) Krueger; three step grandsons, Ryan (Lesley) McLain, Kevin (Molly) McLain and Eric McLain; 14 great grandchildren, four step great grandchildren, and one great grandchild soon to be born; sister-in-law, Ollie Johnson of Hermantown and several nieces and nephews. We are so grateful for her Hospice team as well as the staff at Chris Jensen on Cedar who so tenderly and lovingly cared for our mom. You were so kind and so sweet to her. Thank you very much for all that you did. Visitation 5 to 7 p.m. Thursday, July 2, 2015 in Williams Lobermeier Boettcher Funeral Home and will continue from 10 until the 11 a.m. funeral service Friday at First Covenant Church, 2102 West 2nd St. Pastor Mark Kelly officiating. Entombment at Sunrise Cemetery. To sign the guestbook on-line, visit www.wlbfuneralhome.com. Williams Lobermeier Boettcher Funeral Home is entrusted with final care.

To send flowers to the family in memory of Virginia Carlson, please visit our flower store.