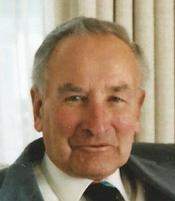 Walter W. Guddeck, 90, of Duluth, died peacefully, joining his bride on Thursday, October 31, 2013 in Keystone Bluffs Assisted Living. Walter was born on May 4, 1923 in Duluth to William and Elsie Guddeck. He was 1942 graduate of Denfeld High School and served in the U.S. Navy aboard the USS Yorktown as an electrician during World War II. He married Florence "Floss" Sundquist on March 5, 1949 in the Elim Lutheran Church. Walter retired from Minnesota Power after 30 years as an electrician. He is one of the last surviving charter members of Christ Lutheran Church and past council president. Walter loved spending time with his children, grandchildren and great-grandsons. He enjoyed traveling the world, golfing, bowling, following baseball, watching Lawrence Welk and listening to the Midwest Polka Party on KDAL Radio. He was preceded in death by his parents, his wife, Floss, and a sister, Laverne Kormos. He is survived by three sons, Wayne (Bobette) of Yukon, Okla, Bill (Debra) of Loveland, Colo and Jerry (Julie) of Duluth; grandchildren, Allison, Wyatt, Bill (Kari), Keith, Chris, Alondra and Kaylea; two great-grandsons, Kaeden and Landen. Visitation will be from 12 noon, until the 1 p.m. memorial service Friday, November 22, 2013 at Christ Lutheran Church. 2415 Ensign St. Pastor Michael Main officiating. Military Honors accorded by the Duluth Combined Honor Guard. Inurnment in Sunrise Cemetery. Memorials to the Disabled American Veterans (DAV) or the Alzheimer's Association would be appreciated. Arrangements by Williams Lobermeier Boettcher Funeral Home.

To send flowers to the family in memory of Walter Guddeck, please visit our flower store.