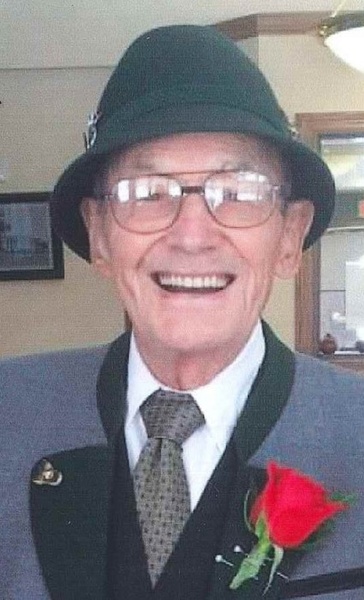 Wayne E. Hoffman, 99, of Duluth, died Thursday, May 9, 2019 in his residence at Edgewood Vista. Wayne was born on November 10, 1919 at home in Proctor, MN to Carl and Emma (Daellenbach) Hoffman. He attended Proctor High School where he played football and played trombone in Mr. Moody’s Marching Band. After graduating in 1937, he joined the CCC and worked on the Gooseberry Falls project until hiring out on the DM&IR Railroad in 1940. He retired in January 1980 as the number one conductor. He was a World War II Veteran serving in the US Navy aboard LST244 and participated in the invasion of Saipan and Okinawa. Wayne was a lifelong member of the former Immanuel Lutheran Church in Proctor and served many positions, church choir, church council and even filled in as interim leader between resident pastors. His true passion as an adult was music. He sang for many years in the AAD Temple Chanters until their demise. He was a well known soloist at many funerals and weddings. He sang in many local opera productions with the Duluth Opera Chorus and toured Europe with that group. After setting down his trombone after high school, he picked it up again around age 75 and played in the Proctor Community Band and the Northwind Drum and Bugle Corps, occasionally marching with other area groups as well. He was a very active member of the Duluth Honor Guard for many years last handling the bugle on April 5, 2019 for his friend Kermit Emberg’s funeral. He was a member of the Masons, the AAD Temple Shrine, American Legion Post 71 and a life member of the DAV. He was preceded in death by his wife of 59 years, Doris (Bergstrom) and his eldest daughter, Saundra Parmeter (Jim). Wayne is survived by his son, Michael (Linda) of Two Harbors; a daughter, Gretchen (John) Norman of Cloquet; Also survived by grandchildren, James (Kim), Joel (Jen), Jennifer (Tom) Beauregard, Jason (Jennifer Barber), Josh (Ally), Jered (Kasha Woida), Brian, Jeffrey (Cayla), and Theresa Hoffman and Lori Norman. There are also 20 great-grandchildren. He also leaves behind his favorite nephew, Joel Wieman. Wayne will be buried at Oneota Cemetery next to his beloved wife, Doris. Visitation 10 until the 11 a.m. memorial service Friday, May 17, 2019 at Williams Lobermeier Boettcher Funeral Home. Military Honors provided by the Duluth Honor Guard. Memorials to the family would be appreciated. The family would like to thank the staff at Edgewood Vista Memory Care and St. Luke's Hospice for the wonderful care they provided.

To send flowers to the family in memory of Wayne Hoffman, please visit our flower store.